Meeting of the Climate Change Dialogue team in Paris’s City Hall, May 2015

For decades, the global response to climate change has centered on a nation-state-dominated framework of targets and timetables for emissions reductions driven by top-down mandates. This 20th Century architecture has focused too much on goals and not enough on actions to mitigate the risks of climate change.  Simply put, it has not produced the results needed to address the build-up of greenhouse gas emissions in the atmosphere.

Relying on a comprehensive and cooperative network of diverse leaders, the Yale Climate Change Dialogue proposed to construct and advance a 21st Century bottom-up policy framework that extends “ownership” of the climate change action agenda – and delivers greater success in terms of on-the-ground results.  We proposed to broaden engagement along three vectors: (1) creating structures within and along side the 2015 Paris Agreement to promote and formalize the role of mayors, governors/premiers, CEOs and other civil society leaders; (2) designing metrics and reporting structures that will encourage contributions from these sub-national jurisdictions and other non-national actors and strengthen accountability mechanisms; and (3) advancing a shift in strategy for the funding of climate change investments, particularly in clean energy, toward an emphasis on the use of limited public resources to leverage private capital. 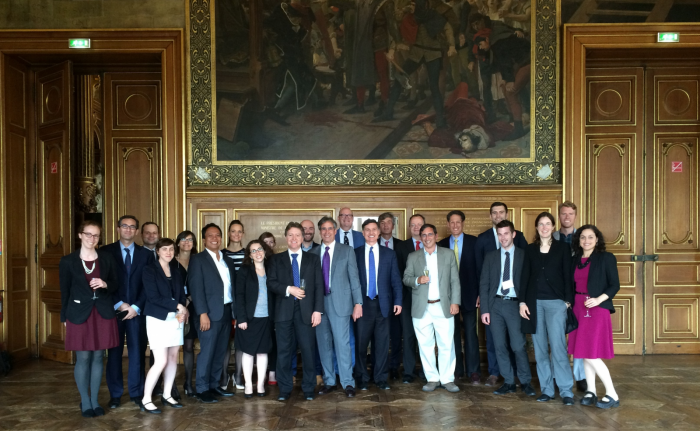 Meeting of the Climate Change Dialogue team in Paris’s City Hall, May 2015

21 Solutions to Protect Our Shared Planet

YCELP, in partnership with the City of Paris, contributed to the development of a report, 21 Solutions to Protect Our Shared Planet, launched on December 4 at the Local Leaders Summit, an event that attracted hundreds of local leaders from around the world, during the 21st Conference of the Parties in Paris. Highlighting 21 solutions developed by cities and subnational governments from around the world, the report outlines current and future best practices that demonstrate how cities and regions can successfully:

YCELP is proud to support the Paris City Hall Declaration signed by local leaders from the Local Leaders Summit, which reaffirms the commitment of cities’ and regions’ leaders to tackle climate change.