A Look at the Complexity of Fracking in North Dakota 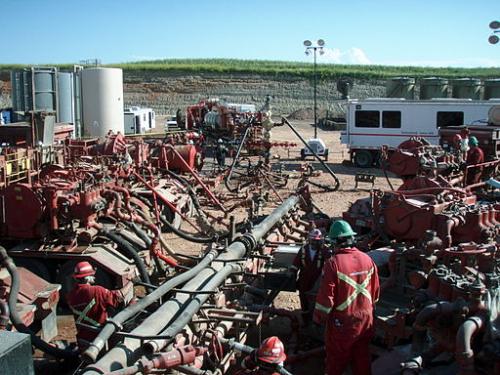 The recent drop in oil prices has impacted many oil-producing states. North Dakota is no exception. The state’s economy has surged in recent years because of the “fracking” boom centered on the state’s 200,000 square mile Bakken formation. North Dakota’s crude oil production has grown at an average rate of about 37 percent over recent years, an expansion that was a major force behind the 30 percent reduction in the United States’ imports of crude oil and petroleum over the past ten years. It now produces more oil than California and Alaska, trailing only Texas.

The oil boom led to many positive developments. North Dakota has the second lowest unemployment rate in the country at 2.9 percent. Even at the height of the recession in 2009, when the national average topped 10 percent, North Dakota’s unemployment rate stayed closer to structural unemployment rates of 4 percent. Spikes in profit led to significant gains in income within the state for several years, although recent drops in commodity prices are beginning to be felt.

In addition to economic opportunities, North Dakota has begun addressing the unique challenges presented by booming oil and gas production on the state and local level. Three recent developments are worth highlighting.

First, statewide limits on the flaring of natural gas have been at the forefront of debates within North Dakota in recent weeks. Unlike some other states that are part of the fracking boom, North Dakotans are drilling for oil, not natural gas. In North Dakota, natural gas is a byproduct of oil recovery and although it has its own energy value, the cost of capturing and transporting gas is too high. As a result, drillers in North Dakota are left with significant byproducts that can have a number of environmental impacts. Typically, operators will “flare” the gas, or burn it off to reduce the total waste product.

At the end of September, the North Dakota Industrial Commission (NDIC) voted unanimously to delay implementation of a rule that would have required producers to capture at least 85 percent of natural gas produced as a byproduct from oil wells. The prior deadline, which would have gone into effect at the end of this year, has been pushed to November 1, 2016. This timeline falls short of what some industry experts requested—namely, a two year extension—and is meant to allow oil producers to use summer 2016 for the construction of necessary pipeline infrastructure which would permit for greater use of the natural gas and, therefore, more affordable capture. North Dakota Governor Jack Dalrymple additionally pushed for an increase in the final flaring reduction rate to 91 percent from the previously agreed upon rate of 90 percent by November 2020. Flaring has been exacerbated by protracted pipeline construction processes as well as by changes in technology, which have increased natural gas production by 16 percent. State regulatory intervention is aimed at decreasing flaring, eventually possibly returning North Dakota gas capture rates to where they stood at the very beginning of the Bakken boom—95%.

The second prominent issue in North Dakota, as elsewhere, is that state action has at times come into conflict with local interests. A lawsuit is currently ongoing in North Dakota state courts between Dunn County—site of some of the most concentrated fracking activity—and Environmental Driven Solutions, LLC. Dunn County filed a civil suit over the location of an oil waste treatment facility, with some residents arguing that the facility should be located in areas that have been zoned for industrial use rather than near residential communities. The NDIC claims jurisdiction over siting of oil waste treatment centers, which has placed the Commission in conflict with some western counties in North Dakota, including Dunn as well as Williams, McKenzie, and McLean counties—all of which are at the forefront of hydraulic fracturing-related activities.  A North Dakota court denied attempts by Williams County to join the case and the outcome of remains uncertain. The tensions it raises—between the interests of state bodies and the preferences of counties and localities—will likely linger for years to come.

The effects of the oil boom on North Dakota’s Native American tribes is the third recent development which calls for attention. The impacts of oil production have been keenly felt on the Fort Berthold Reservation, which is responsible for approximately 40% of oil produced within North Dakota. Earlier in the year the Mandan, Hidatsa, and Arikara Nation established a nonprofit commission—the West Segment Regulatory Commission—to help regulate oil production in one portion of the Reservation, which is home to approximately 1,000 tribal members. The West Segment is also the site of significant oil-related activity. The Commission, comprised of a five-member panel, has been given the authority to regulate trucking companies, oil company employees, as well as various aspects of oil development including the presence of “man camps” housing oil company employees. Recent regulatory efforts have included requirements tailored to truck companies: these entities must register their trucks and employees alongside installing tracking monitors which will relay information to a central dispatch regarding the contents of trucks and the identity of their drivers, among other information. The council’s corporate charter received unanimous approval from the Fort Berthold Tribal Council, with the Commission itself described by some as a pilot project meant to increase the degree of tribal supervision over natural resource development activities taking place on tribal land.

A third of North Dakota’s oil production occurs on federal and tribal land. These lands would have been the subject of new rules that the Bureau of Land Management (BLM) issued and expected to go into effect in June 2015. However, the BLM rules are now subject to preliminary injunctions arising from a lawsuit in district court led by Wyoming, Utah, Colorado, and North Dakota. As a result, the BLM rules will not be implemented until, and depending upon, the conclusion of litigation. Judge Scott Skavdahl found that the BLM acted outside the ambit of its statutory authority in promulgating the rules. In addition, Judge Skavdahl noted arguments by the Ute Indian Tribe claiming that the BLM had failed to consult with the tribe on an appropriate government-to-government basis—a requirement of the BLM’s policies. The litigation will doubtless continue to impact regulations in North Dakota by ensuring, for the time being, an absence of federal rules.

While economic fortunes continue to hinge on broader trends—including international oil prices—local, state, and tribal responses to oil production in North Dakota can be expected to impact the future of fracking in the Bakken, and beyond, for years to come.