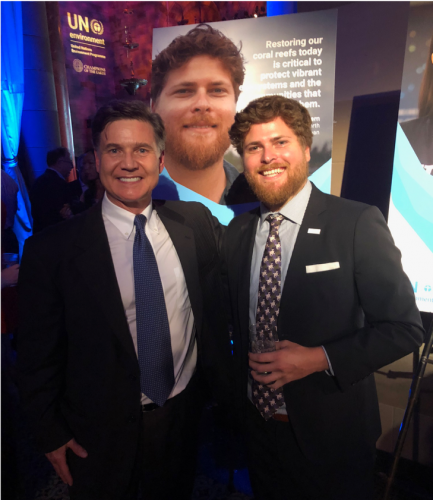 Gator, FES class of 2015, received the honor for his work through his organization Coral Vita. Coral Vita aims to restore coral reefs through technology that facilitates rapid coral growth — as much as fifty times faster than coral grows in nature. The organization also grows coral that is resilient to various climate change-related threats, such as increasingly warmer and acidic oceans. Coral Vita works across the globe, collaborating with governments, researchers, communities, and more to restore coral reefs worldwide.

Gator was named the 2018 Champion of the Earth for Latin America and the Caribbean. Currently, he is working on developing a facility in the Bahamas for reef restoration, education, and eco-tourism. As a Champion, he will receive training, mentorship, and funding from the UN Environment Program in order to continue developing and implementing his vision for preserving and restoring coral reefs.