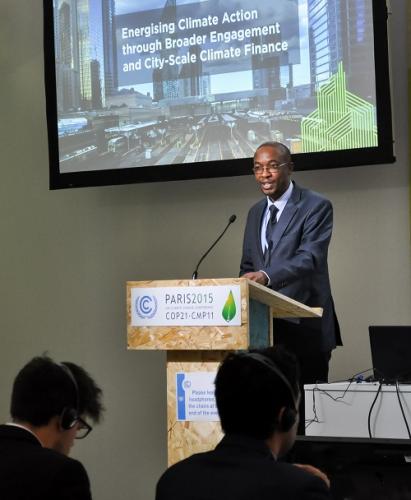 In Paris, a growing recognition that cities and regions will help deliver needed climate action has infused the global climate talks with a new spirit of optimism and direction for future work.

On December 7th, the Yale Center for Environmental Law & Policy and C40 held a joint event to discuss how improving city-scale financing can energize and support future climate action from mayors and regional leaders. The event took place in the Blue Zone of Le Bourget in Paris during the global COP21 climate talks and included panelists from the private sector, academia, and city space.

During his opening remarks at the event, C40 Executive Director Mark Watts said: “70% of everything delivered by C40 cities in the last 10 years has been funded out of city revenues…If we really want to unlock potential of mayors and cities, we need to bring access to global funds to mayors and cities.”

Mpho Parks Tau, Executive Mayor of Johannesburg, shared his city’s success story. Supported by access to private finance, Johannesburg has achieved a 15% reduction in CO2 emissions since 2013. The city launched a highly successful green bonds program that was 150% oversubscribed at the 2014 bond auction, illustrating even larger potential for future issuances. Mayor Tau is certain that the model could be extended to other cities. He stressed that sub-national governments “need better access” to new financing mechanisms developed by the international process “so that we can accelerate implementation in our cities.” 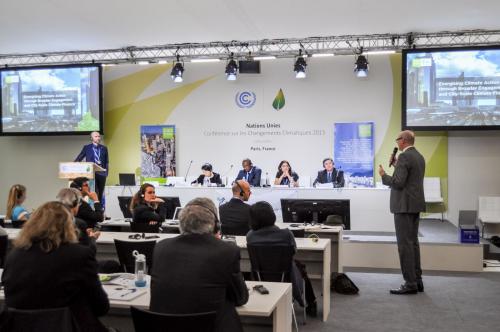 Malini Mehra, Chief Executive of GLOBE International and an 18-year veteran of the climate talks, tied the role and responsibility of local and regional governments into the panel: “National law makers set the framework for ambition,” but it is essential to involve “local lawmakers who will pass budgets to allocate funds where they are needed.” She emphasized the critical and “democratically-mandated” role local and regional governments play in reporting, monitoring, and verifying commitments to ensure their implementation.

Broadening the discussion to big-picture next steps, Dan Esty, Hillhouse Professor of Environmental Law and Policy at Yale University, rounded out the panel with a vision of how innovative private-public financing mechanisms and improved metrics can empower mayors’ and regional leaders’ climate actions post-Paris:

“We need to move away from a model that relies on government subsidies toward a policy model focused on using limited public resources to leverage private capital…We need platforms to register commitments — there needs to be a place and way for all actors to be able to report success and acknowledge failures in order to transition from things that are not working to what does work.”

A audience of more than 150 - including David Miller, former C40 Chair and Mayor of Toronto - engaged the panelists in a robust Q&A session on connecting cities and finance. 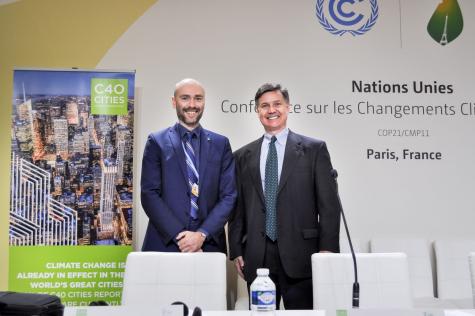 In conclusion, Dan Esty expressed his hope that the final COP21 agreement would formally recognize the broader engagement of local and regional actors - what he called the “spirit of Paris” - and make it a formal piece of the game plan moving forward.

Mark Watts also concluded with reference to the tipping point facing global climate talks: “I hope we’ve finished the period where we have to make the case for the role of cities in global climate action. Now we can focus on how to drive billions of dollars to cities so mayors like Mayor Parks Tau can deliver as much climate action as possible.”