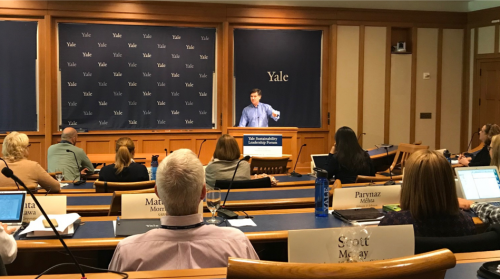 Two weeks ago at the Yale Sustainability Leadership Forum, leaders in the environmental field gathered to share ideas, perspectives, and solutions on a range of disciplines related to sustainability. This year’s forum, hosted in partnership with the Yale Center for Environmental Law and Policy and the Yale Office of International Affairs, focused on “mega trends distinguishing sustainability from its 20th century precursors”. Yale professors, researchers, and fellows, like James Cameron, Anthony Leiserowitz, Bradford Gentry and Julie Zimmerman, presented and engaged in discussions with industry practitioners, scholars, and thought leaders who had gathered in New Haven to explore what sustainability looks like in the 21st century.

On Wednesday morning, Susan Biniaz hosted a session, “Global Climate Change Negotiations: An Insider’s 25-year View”. Biniaz was Deputy Legal Adviser at the State Department’s Legal Adviser’s Office for over three decades, as well as the lead climate lawyer and a climate negotiator. Throughout the session, she offered insights from her extensive experience negotiating international climate agreements.

Biniaz framed the conversation around four major international climate agreements and discussed these agreements through the lens of national commitments and legal obligations. The session explored the overarching theme of how climate negotiations have evolved over time and how negotiations have built off of past agreements. Ideas developed in Copenhagen, like financial contributions from countries, planted the seeds for concepts incorporated in the Paris Agreement.

Biniaz closed the session with a discussion of the implications of the United States’ withdrawal from the Paris Agreement, including the effects on other countries’ commitments to the agreement and ambitions to keep up with emissions limitations. The United States’ withdrawal and lack of a serious strategy to address climate change, she concluded, along with the recently released report from the International Panel on Climate Change, do not bode well for the future of our planet.

On Friday afternoon, Professor Dan Esty, Director of the Yale Center for Environmental Law and Policy, ended the forum on a positive note, sharing why he thinks the 2015 Paris Agreement has potential to be a “breakout moment” in the global movement to address climate change. He discussed pivotal changes we can make in the way we think about identity and policy disputes, like how to incorporate a deeper understanding of other people’s priorities into climate solutions. The path toward a sustainable future, he maintains, must center on these solutions rather than debates over identity.

The Paris Agreement incorporates new ways of thinking, from a focus on solutions rather than targets and timetables to broader engagement from sub-national actors, including mayors, corporate leaders, and university presidents. Esty is optimistic that the spirit of collaboration that brought countries together in Paris is still alive and that actors at all levels and across sectors, including countries, states, cities, and businesses, will continue their “we’re still in” strategy of sticking to the climate goals of the Paris Agreement. We are, as he said, at a watershed moment in the climate movement.