On World Environment Day, “A Better Planet” Event Highlights the Need for Collaboration 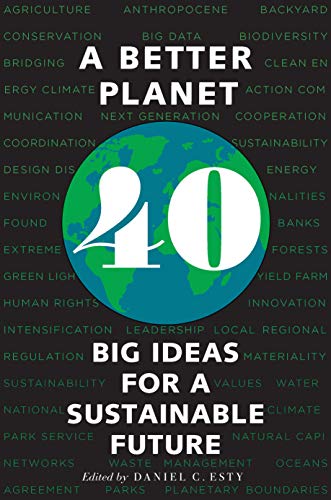 This June, four authors from “A Better Planet: Pathways to a Sustainable Future” joined Center Director Dan Esty, Yale FES Dean Indy Burke, and special guest UN Ambassador Marco Antonio Suazo to discuss how the lessons from “A Better Planet” can be used to address today’s environmental challenges. In a wide-ranging discussion that touched on forests, waste management, biodiversity, and the Paris Agreement, the event’s speakers ultimately concluded that more collaboration is necessary to achieve a sustainable future.

The four authors who spoke during the event included FES Professor Mark Ashton, FES Professor Marian Chertow, George Mason Professor and UN Foundation Senior Fellow Thomas Lovejoy, and Yale Lecturer and UN Foundation Senior Fellow Sue Biniaz. All four panelists spoke about how their chapters from “A Better Planet” are linked to the conversations around justice happening today across the U.S. and the world, and also highlighted that collaboration will be a critical component of successfully putting the world on a sustainable trajectory for the future.

Ambassador Suazo helped to frame the discussion, noting that the event took place on June 5, World Environment Day, and that all environmental issues are universal and touch every human being. Dean Burke continued, saying “We focus today on the environment, against a backdrop of other challenges including social injustice, racism, and a pandemic. We highlight the need for more dialogue and collaboration to find a common purpose for sustaining lives, sustaining society, and sustaining the environment.”

Professor Ashton joined the panel to speak about the social and economic issues that surround sustainable forest management. He highlighted the lack of appropriate valuation of forests in our current economic system, noting that forests are valued more for their wood after they’re cut down than they are as in-tact ecosystems that provide critical biodiversity services. He concluded by explaining that more stable land tenure and better enforced regulations will be critical to appropriately valuing forests and ensuring that they are managed sustainably in the future.

Professor Chertow’s talk focused on transforming the global waste management system. Her chapter in “A Better Planet” focuses on shifting the waste and materials management paradigm from “harm reduction” to “value creation.” She touched on the differences between waste in developed and developing countries, and underlined the need to adopt the “3 R’s” framework – reduce, reuse, recycle – in order to transform our waste system into one that can be sustainably managed.

Professor Lovejoy then discussed the importance of biodiversity for tackling the climate change crisis. While the current status of biodiversity is dire, he noted that there is some good news: “nature can help us out of our predicament,” he said. Restoring ecosystems at a planetary scale will acknowledge that the planet functions as many interconnected systems, and will benefit humanity as well as nature.

Sue Biniaz was the final speaker during the event. She focused on why the Paris Agreement, while a good foundation, cannot tackle climate change alone. She explained how the Agreement is different from other international accords, notable for its ambition. While the Paris Agreement is part of the UN Framework Convention on Climate Change (UNFCCC), achieving the goals of the Agreement requires a transformation of the entire economy, which goes well beyond the UNFCCC and the environmental realm. The Paris Agreement implicates all other international agreements (especially those in the global trade regime) and all sectors in the global economy. In order to achieve the ambitious goals outlined in the Agreement, collaboration across sectors, governments, and organizations will be critical.

To conclude the discussion, Professor Esty posed a question to the speakers: “Are we approaching a climate change doomsday?” Responses were mixed. At one end of the spectrum, Professor Ashton replied, simply, “yes.” Professors Lovejoy and Chertow were slightly more hopeful, expressing that we can still do the right things to prevent a climate doomsday, but it is important to note that some parts of the word will bear far more of the impacts of climate change than others. Ambassador Suazo said he was optimistic, and Sue Biniaz offered a nuanced assessment that we are beyond the point of mere mitigation and adaptation, and that geoengineering solutions will need to play an important role in preventing a worst-case climate change scenario.

Though the answers to this final question were mixed, it is clear that there are many opportunities to improve environmental outcomes, protecting both humans and the natural world.  “A Better Planet” highlights many of these opportunities, and if we can collaborate across sectors and nations, we may be able to achieve a sustainable future for all.

For more information on “A Better Planet: 40 Big Ideas for a Sustainable Future” click here.