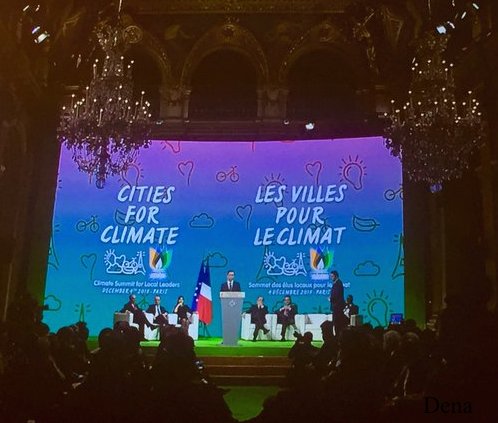 This blog was originally published on the Huffington Post on December 7, 2015.

World leaders who wish to honor the victims of recent ISIS attacks must do more than just show up at the ongoing UN climate change negotiations. They must secure a strong climate change agreement to help reduce the climate conditions that make it easier for extremist groups to gain power. Unchecked climate change increases the risk of droughts like the one in Syria that set off a chain of events–agricultural failure, a refugee crisis, and political unrest–that facilitated the rise of ISIS.

While studies have linked climatic change to conflict throughout the world, obviously many factors contribute to conflict and regime change. A climate change agreement alone will not stop these conflicts. But world leaders seeking to show solidarity with Paris and to make progress against extremism can send an emphatic message with an ambitious agreement that helps prevent climate conditions that make it easier for groups like ISIS to take hold.

To show solidarity after the Paris attacks, more than 120 world leaders pledged their attendance at the ongoing Paris climate change talks. On November 30th, more than 150 leaders followed through and opened the talks with calls for action. But showing up is just playing defense. Disputes over financing and temperature targets are threatening momentum of the climate negotiations to reach an ambitious agreement. World leaders must stay engaged and ensure their delegations deliver a strong climate agreement by the close of the negotiations. To win the war on climate change and limit the climate conditions that can strengthen groups like ISIS, we need the global community to act.

With a strong climate change agreement, world leaders have the opportunity to embody the true meaning of solidarity–a meaning that extends far beyond social media posts and well-intentioned sound bites. Deriving the term from the French solidarité, the Oxford English Dictionary traces the origin of solidarity back to 1841 and the concept of “collective responsibility.” Collective responsibility is precisely what a successful international response to climate change demands.

The Paris climate change conference represents a shrinking window of opportunity to stand together in collective responsibility and protect our common planet from impending tragedies. Tragedies that will strike the most vulnerable populations hardest. Tragedies, that like bombings and shootings, we cannot always prevent, but we can make less frequent through diligence and solidarity. A strong 2015 climate change agreement signals our commitment to each other to lessen these tragedies– and provides one means of tribute to victims of the ISIS attacks.

Many have already weighed in with cynical outlooks for a Paris Agreement, but there’s hope for a deal of which the world can be proud–if the global community stands together. Here are three ways channeling and expanding solidarity will support a strong climate change agreement.

First, solidarity embodies the new spirit of bottom-up commitments for the Paris Agreement–more than 180 nations have already pledged actions to mitigate climate change. Recent analysis predicts that if these pledges are implemented through 2030 they reduce the risk of exceeding 4°C of warming by 80% (in comparison to a scenario with no new policies to reduce emissions). While these commitments may not bring the planet to the safer +2°C trajectory targeted by many in the international community, they are a step forward in uniting together to deliver a solution that is more than any one nation’s effort.

Second, solidarity means expanding the concept of collective responsibility beyond national leaders. Cities, regions, and businesses are already making significant emissions reductions and can help close the gap between our current trajectory and the 2°C trajectory. In fact, if the world pursues a safer trajectory, urban leaders’ decisions could influence up to 1/3 of the carbon emissions reductions needed over the next five years.

Third, solidarity means holding each other accountable to build climate change ambition beyond the Paris Agreement. Even if the Paris Agreement doesn’t get us to the +2°C trajectory, it can be a step toward that goal. The Montreal Protocol–hailed as one of the most successful international environmental treaties–began with a loose cap for pollution that was only ratcheted down over time. The Paris Agreement could similarly be strengthened over succeeding negotiations. Unequivocally, we should strive for the most ambitious agreement possible in Paris. To do anything less would be to shirk our responsibility to vulnerable communities who cannot wait. However, it is critical to achieve a climate agreement this year, and solidarity means continuing to hold each other accountable to increase ambition in the future.

While the international climate community has long fractured over how to allocate shared responsibility for climate change, it has recognized the need for common responsibility to solve climate change since our first climate agreement in 1992. The Paris Agreement presents a critical opportunity to embrace that collective responsibility together. Solidarity means more than showing up; it must be defined by what we deliver together.