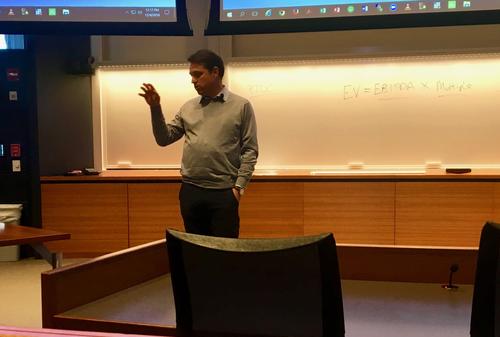 The last Sustainable Finance Monthly Seminar of 2018 hosted Adam Zurofsky, Deputy Secretary at the Office of New York Governor Andrew Cuomo. The Sustainable Finance Monthly Seminar features leading practitioners and experts in the field of sustainable finance and investing who speak about the challenges and opportunities in the field. The event was co-hosted by the Center, the Yale Center for Business and the Environment, the Yale School of Management Energy Club, and the Yale School of Forestry and Environmental Studies Energy student interest group.

As Deputy Secretary, Zurofsky oversees energy policy, financial regulation, and finance policy in New York. Through this role, he helps to lead implementation of Governor Cuomo’s climate agenda. He spoke about the development of climate and financial policies in New York with a focus on animating the private sector in the fight against climate change.

He identified three things that New York can do in the face of weak federal climate action. One is statewide resistance to the abandonment of Paris Climate Accord goals by the federal government. This includes the formation of the US Climate Alliance of 17 (and counting) states who are still committed to the goals of the Paris Climate Accord. This leads to Zurofsky’s second action item, taking strong state action on the environment. Governor Cuomo has set several targets for New York’s energy transition, including 80 percent emissions reductions by 2050, a 50 percent renewable energy mandate by 2030, and an end to coal in New York by 2020. The key now is to implement actionable policies to meet these commitments.

The third thing that New York can do is to animate the private sector, or “rev” the market. Rather than artificially inflating the renewable energy market with subsidies and “command and control” policies, Zurofsky is putting the focus on private capital. How can the state create the conditions, incentives, and structures needed for renewable energy transition in New York? This will include investments in energy storage to hold power generated by wind and solar. This will also include animating local industry, like the offshore wind industry of Long Island. The governor has committed to the development of 2.4 gigawatts of offshore wind energy by 2030, which would provide enough energy for well over 1 million houses.

As part of working towards its goal of animating the private market, New York has implemented a comprehensive energy strategy, Reforming the Energy Vision (REV). REV aims to build a clean energy system by growing New York’s renewable energy development, investing in energy efficiency, and updating infrastructure. Other initiatives include the effort to decarbonize the $200 billion New York Retirement Fund and to use the New York Green Bank to fill in the gaps that private capital won’t invest in. With the Green Bank, the state hopes to use the private sector to transform financing markets to increase investments in New York’s clean energy markets.