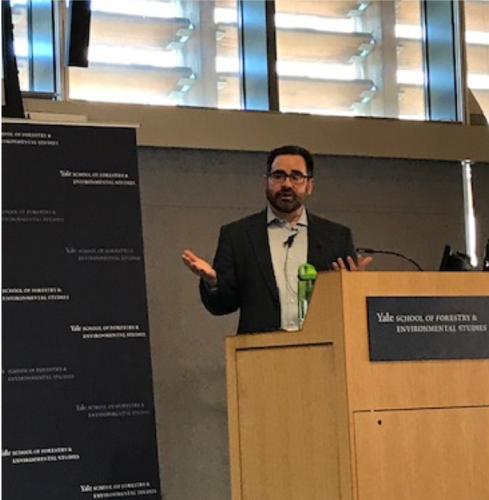 The Green New Deal proposal has provided a vision of what a sustainable future in the United States could look like. Introduced in the U.S. House of Representatives in February 2019, the resolution proposes a transformation of the U.S. economy to enact major societal change and actively address climate change. Key among its goals is achieving economy-wide net zero greenhouse gas emissions and establishing millions of high-wage jobs. While there has been controversy following its introduction, it has generated valuable discussions about which policies could fulfill the vision put forth in the proposal. According to one FES lecturer, Dr. Rob Klee, the country should look to states for what these policies could look like.

Dr. Rob Klee is uniquely qualified to speak on state-level climate change actions. He is the former Commissioner of the Connecticut Department of Energy and Environmental Protection (DEEP) and is currently a lecturer at the Yale School of Forestry and Environmental Studies. During his time as commissioner, he implemented and oversaw several Connecticut policies addressing climate change, including the state’s binding emissions reductions target: 45 percent reductions by 2030. He recently addressed students during a talk titled “Searching for the Green New Deal? Look to the States.”

His presentation focused on ten actions already taken by states that the federal government could adopt to meet the mission and values of the Green New Deal at the national level. One policy is a nationwide clean energy standard. Over half of the states in the U.S. have some form of a Renewable Portfolio Standard, mandating utilities to source a set percentage of their energy from renewable sources by a target date. A nationwide clean energy standard would be monumental in reducing U.S. emissions and advancing the economy through the promotion of renewable energy sources and the creation of new clean jobs. Other policies include setting economy-wide greenhouse gas targets, investing in distributed solar for all (particularly investments in low and moderate income households), and investing in coastal resilience.

Dr. Klee finished his talk with a reality check. While some states are strong on climate action, most do not have the scale or influence to transform the national economy to meet the emissions reductions needed to effectively fight climate change. In addition, the lack of specificity of the Green New Deal agenda has created a vacuum, which politicians have filled with their own agendas – a dangerous situation. Yet Dr. Klee concluded on a positive note: States have proved these policies are possible, and he is optimistic that it is possible to translate their actions to a national scale.