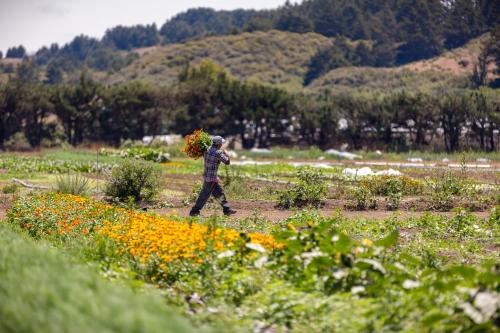 Within the Natural Resources Defense Council (NRDC), there is a small team of employees who believe that regional food systems make up not only the subject of work but also a theory of change – that issues of national and global importance may be effectively approached by leveraging state and local politics.

With support from the Yale School of Forestry and Environmental Studies’ Moran Fellowship and the Yale Sustainable Food Program’s Global Food Fellowship, I have had the opportunity to work with NRDC in an effort to integrate these diverse perspectives. Since last summer, I have been assisting NRDC’s regional food systems team with legal research, legislative advocacy, and other projects in support of the sustainable production and regional distribution of food. One of the areas in which this team has increasingly focused its efforts is what we refer to as food equity.

The proclivity for making prescriptions is a major shortcoming endemic to both the environmental community and good food advocates. The impressionable politics of food not only has the tendency to localize, but also gives way to a lot of talk about what to eat and how to eat. Dietary prescriptions do not usually fit within the regional food systems theory of change, and they almost always ostracize potential allies. While our farm-to-food-bank bill successfully brought together environmentalists, rural farmers, and urban food relief organizations, few other causes do. And while avoiding prescriptions is generally a good prerequisite for building political coalitions, the regional food systems model necessitates the inverse of prescribing: listening. Within the New York metropolitan area, and frankly throughout the U.S., we hear about the need for a food system that is more just, one that is less exploitative of humans and natural resources, and in particular one that builds wealth and power in communities of color. When we listen, we hear the need for food equity.

But where is the place for building regional food equity within an international environmental organization? How does that not constitute “mission creep”? In my view the commitment of groups like NRDC to food equity work, as well as regional food systems, is anchored within distinct internal trajectories, which I won’t get into, but a broader strategic motivation jumps out. Particularly through its environmental justice (or “EJ”) work, NRDC seems to increasingly understand that its work must graduate beyond battles that are purely relevant to environmentalists and happen to also concern disadvantaged groups.

Key to NRDC’s success has long been coalition building among unconventional or nontraditional allies, and key to the evolution and survival of environmentalism writ large will be the hard work of growing power and wealth in disenfranchised communities. In order to build capacity with lasting impact NRDC must materially realize support for the initiatives most important to such communities, regardless of direct environmental salience, in order to invoke the advocacy power of diverse groups when NRDC needs it most.

NRDC’s new President Rhea Suh has made a similar point, “the [environmental] movement is really vulnerable for being too insular. Diversity is not simply just reflecting demographics. Diversity is really about content, it’s about substance, it’s about what we do, why we do it, and how we pursue it.” I would argue that at the root of all environmentalism is the search for justice, the remedying of neglect and exploitation of natural resources and the humans who depend upon them. And one effort for justice will usually not succeed in isolation from parallel efforts.

In recent years, NRDC has increasingly dedicated its attention and resources to community-based efforts concerning those most vulnerable, particularly in the case of communities of color and poverty, usually filed under “EJ” work. Collaborating with farmers may at first feel like a step too far for the older environmentalist, to whom most agricultural groups, unlike most EJ groups, have long been the enemy in fights for cleaner water and wildlife protection. But building unlikely alliances – whether it is with a Farm Bureau chapter and a food bank to push for our Farm to Food Bank Bill, or advocating for increased pay and protection alongside farm laborers – will result in a stronger and more effective environmental organization.

Strategically, food equity work and its attendant coalitions will help to insulate large environmental organizations like NRDC from the assertion that environmentalism is for yuppies and old well-off white people – neither of whom appear to outsiders to have any greater daily concerns than birds and trees and organic broccoli. The conservative right has done an exceptional job at coupling environmentalism with job-killing, particularly as it infringes upon farmers, ranchers and loggers. Meanwhile, there is arguably an equal if not greater number of working rural people who are negatively affected by the absence of strong environmental protections. Food equity and EJ are key to effectively reframing environmentalism in this political landscape.