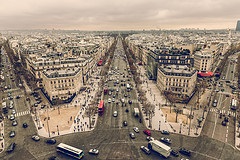 For two decades, the global response to climate change has centered on a top-down, national-government-led framework based on a series of emissions reduction targets and timetables. But this international treaty architecture has produced neither the action orientation nor the on-the-ground results needed to address the build-up of greenhouse gases in the atmosphere.

Raising the trajectory of the 2015 Climate Change Agreement demands fresh thinking and an action agenda that goes beyond the efforts of the past two decades. A truly ambitious outcome needs a new bottom-up structure that emphasizes the engagement of a broader set of actors in climate change mitigation and adaptation efforts —and celebrates the real progress that mayors, governors, CEOs, and other civil society leaders are already achieving in this regard.
The December “Conference of the Parties” (COP 21) can launch this “broader engagement” approach with a new policy framework that formalizes the diversity of ongoing efforts and programs that are helping to protect and restore the climate system.  Such a re-engineered Climate Change Agreement architecture will require expanded legal and policy options that link and institutionalize the contributions of cities, states/provinces, civil society, companies, and other non-nation-state actors to climate change action.
Under the auspices of the Yale Climate Change Dialogue, a diverse group of thought-leaders from around the world have framed a set of options and opportunities for delivering a meaningful new Agreement in December.  This “broader engagement” strategy aims to energize the global response to climate change and shift the “psychology” of the negotiations in three important ways:
First, it seeks to highlight in the Paris Agreement the successful actions and commitments of non-nation-state actors – demonstrating that success can be achieved at broad-scale and low-cost.  Given the limited day-to-day role that Presidents and Prime Ministers play in shaping the carbon footprints of their societies, climate change success will require moving beyond the 20th Century focus on nation-state-driven targets and timetables to emphasize a broader base of action. The Yale Climate Change Dialogue approach would thus provide a mechanism – in any one of several forms – to allow Mayors, Governors, corporate executives and other leaders in a position to address greenhouse gas emissions to signal their endorsement of the goals of the 2015 Agreement and to formalize their own climate change commitments.
Second, it encourages and tracks non-nation-state contributions to emissions control through innovative metrics. An “all-hands-on-deck” approach to future climate change action could establish a simple reporting structure within the 2015 Paris Agreement. Such a structure should encourage commitments from non-nation-state actors, provide an easy-to-follow set of metrics, and promote action by all who are positioned to contribute to the global response to climate change.  It should provide ways to track and verify contributions over time.
Third, it promotes broader engagement in clean energy finance through strategies designed to use limited public funds to leverage private capital.  The scale of traditional public financing is simply too small to achieve the ramped-up commitment to energy efficiency and renewable power that is required.  The Paris Agreement thus needs to build on the funding efforts to date, such as the Green Climate Fund, and find ways to de-risk the flow of private capital into climate change investments and establish new policy tools (e.g., green banks, green bonds, etc.) that can channel increased flows of private capital to clean energy projects.
Together, these three components of the “broader engagement” strategy can invigorate the global response to climate change, support the “Agenda of Solutions” that the 2015 Paris Agreement needs to advance, and build post-Paris momentum for broad-gauge action on climate change on a range of scales.
Daniel C. Esty is the Hillhouse Professor of Environmental Law and Policy at Yale University. One of the world’s leading experts on corporate environmental strategy, he helped negotiate the 1992 Framework Convention on Climate Change as an official with the US Environmental Protection Agency. From 2011 to early 2014, Professor Esty served as Commissioner of the Connecticut Department of Energy and Environmental Protection. His recent prizewinning book, Green to Gold: How Smart Companies Use Environmental Strategy to Innovate, Create Value, and Build Competitive Advantage, argues that pollution control and natural resource management have become critical elements of marketplace success and explains how leading-edge companies have folded environmental thinking into their core business strategies.