Reflections on the 2017 New Directions in Environmental Law Conference 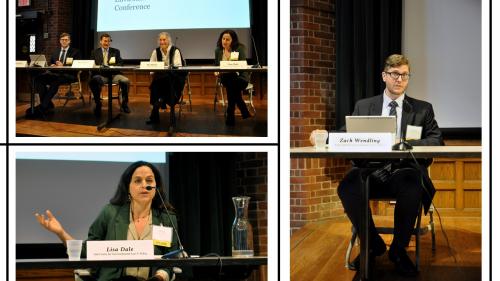 On February 24 and 25, hundreds of students, professors, and practitioners from across Yale University and the world gathered at the Yale School of Forestry and Environmental Studies (FES) for the 2017 New Directions in Environmental Law Conference. Jointly hosted by FES and the Yale Law School, the conference is an annual student-run event that explores legal and policy dimensions across specific themes.

For two days, conference participants engaged in workshops and panel discussions that centered on the interface between the environment, national security, and human rights. While many of the discussions touched on the new presidential administration, attendees shared a common desire not to place their focus on the current political moment but rather to work together to build an environmental movement that leverages progress made over the past half-century into long-lasting and impactful action and reform.

Participants discussed strategies in terms of time scales that spanned decades and even centuries – stretching not only into the future, but also reaching back into the past for lessons that can inform and shape today’s strategies and policies. In the opening panel discussion, “Justice, Human Rights, and the Land: A Paradigm for a New Environmentalism in the Face of Climate Chaos,” for example, panelists stressed how incorporating the experiences of native peoples and their relationship with the land could make for a more inclusive and effective environmental justice movement.

This historical appreciation also means challenging participants to learn from past failures and to address them through new approaches. In “Securing Security: Building Narratives and Networks for Change Across Public and Private Sectors,” Paul Lussier, founder of the Yale Science with Impact Communications Network, demonstrated how new methods of engagement could allow private actors to build broad-based coalitions to advance shared sustainability agendas.

Conference attendees also heard from members of the Yale Center for Environmental Law and Policy. Lisa Dale, Zach Wendling, and David Deese joined Susan Biniaz from the U.S. State Department to discuss how international environmental agreements are translated into on-the-ground results. At the center of their discussion was the 2015 Paris Climate Change Agreement, which through the scope of its coverage and inclusion of new reporting and disclosure requirements represents a fundamental rethinking of international diplomacy in the era of climate change.

The conference concluded with a keynote address delivered by former Assistant Secretary for the Army for Installations, Energy, and the Environment Katherine Hammack. In her remarks, Ms. Hammack stressed the necessity of communicating the possibility of progress to even the most disinterested audiences. She discussed her efforts to develop new technologies and processes for the Army that saved money and improved efficiency while also reducing its carbon footprint.

Throughout these discussions, conference participants emphasized the opportunity to rethink and reengage with environmental law and policy. As the effects of climate change continue to grow more critical and complex, innovation and advances in information, technology, and public policy make possible new approaches to the world’s most-pressing environmental challenges. Through the kind of cross-disciplinary dialogue fostered by the New Directions in Environmental Law Conference, those who wish to build a more sustainable future can learn how to move the planet toward a more effective and robust response to climate change in the 21st century.