Part 4 - What You Missed in Katowice: A Report from COP24 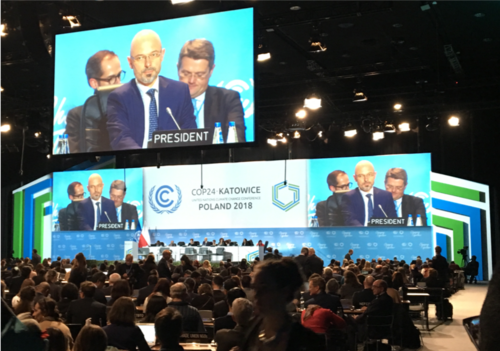 This is part four in a four-part series about COP 24. To read previous coverage from COP, click here. Part one is here, part two is here, and part three is here.

The main goal of COP24 was articulating and adopting the “Paris Rulebook” - the specifics of how the 2015 Paris Agreement will be implemented. The primary topics under negotiation were related to adaptation and mitigation, transparency and reporting (i.e. what information countries provide and how often they provide it), the global stocktake (a periodic review of progress toward climate goals), and financing climate efforts.

The parties were able to reach an agreement around most of these issues, with the exception of the role of market-based financial mechanisms, the determination of which has been pushed to COP25. Some stakeholders, concerned in advance of COP24 that there could be a breakdown of negotiations, consider the Katowice conference a success simply because a rulebook was adopted. However, political pressures from several countries dimmed the hopes of more ambitious actors, and many NGOs have since described several aspects of the rulebook as too weak.

For instance, the landmark IPCC report on 1.5 degrees, released prior to the conference, had the potential to inspire more ambitious wording and pledges in the rulebook, but several countries refused to welcome the IPCC report, including the United States. Additionally, many actors believe that the lack of ambition – related to countries’ goals to decarbonize and ramp up their climate action – that was present prior to COP24 was not adequately addressed in Katowice.

While these signals are disheartening, there were many positive outcomes from COP24. As mentioned above, the fact that a rulebook was adopted at all should be seen as a huge success, especially given the increasingly fraught – and anti-climate action – domestic politics of many of the Parties. Additionally, the increasing focus on sub-national and non-state actors’ roles in climate action demonstrates that the international climate regime now recognizes the essential role that non-country actors play. In this vein, the Parties adopted a local communities and indigenous peoples’ platform that will help facilitate climate action among local and indigenous groups.

Throughout the successes and false starts, the conference in Katowice brought together a diverse group of global voices and yielded a unified outcome. COP24 demonstrated the dedication of dozens of countries, hundreds of organizations, and thousands of individuals to act on climate.