Part 3 - What You Missed in Katowice: A Report from COP24 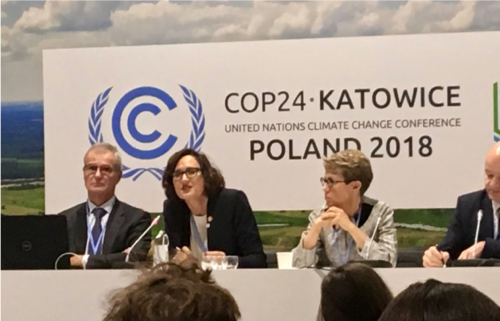 This is part three in a four-part series about COP 24. To read other coverage from COP, click here. Part one is here, and part two is here. Part four is here.

Finance was a central issue during the negotiations of the Paris Rulebook at COP24. In particular, mobilizing private sector finance will be an important component of reaching the Paris Agreement goals. One panel at the conference in Katowice addressed this issue by focusing on European firms. Speakers included Yvon Slingenberg from the European Commission, Olivier Imbault from BusinessEurope and Air Liquide, Sandrine Dixson-Declève from the Club of Rome, Helena Vines Fiestas from BNP Paribas, Tytti Peltonen from Metsä Group, and Pascal Chalvon from Solvay.

While all panelists were in agreement about the need for private finance investments in decarbonization, they highlighted several issues that need to be addressed in order for the private sector to fully participate in the global climate regime. In particular, the speakers discussed risk, fairness, and communication.

The panel also discussed examples of progress. Helena Vines Fiestas (BNP Paribas) spoke about Climate Action 100+, a group of 300 investors with $32 trillion in assets who are encouraging polluting companies to take climate action. Similarly, each of the speakers represented a company or organization that is dedicated to both profits and decarbonization, illustrating that economic gains and climate action can go together.