Next Steps for Climate Change: A Conversation with Todd Stern 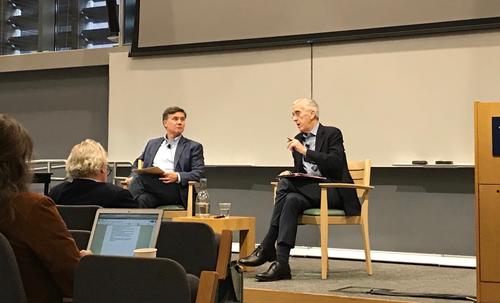 On Monday, October 22, the Yale Center for Environmental Law & Policy hosted Todd Stern for a conversation about the next steps for climate change. Stern, the former US Chief Negotiator for the Paris Climate Agreement, is currently a senior fellow at Brookings Institution and a visiting lecturer at Yale Law School. Center Director Professor Dan Esty moderated the event.

Stern began with a discussion of why he considers the Paris Agreement to be a breakthrough agreement, including its structure of updates in 5-year cycles, its blend of a bottom-up and top-down structure, and its less strict distinction between developed and developing countries. At this year’s UN Climate Conference, negotiations will focus on implementing rules and guidelines to create a working operational regime from the Paris agreement. He predicts, however, that upcoming negotiations will be difficult in the face of the US withdrawal from the agreement.

Stern then considered climate change more broadly. While Paris is an ambitious agreement built on strong long-term goals, climate change remains a race against time.  The transition to renewable energy is happening, yet the question remains if we are transitioning at the speed and scale necessary to adequately address the problem. A key issue, Stern posits, is the disconnect between knowing that we need to act and grasping the true scale and speed of this global crisis. When politics gets involved, the problem is exacerbated. A global increase of 2 degrees Celsius, he reminds us, is still going to have dire global consequences.

The students in the audience then had an opportunity to ask questions, several of which centered on finance and the Paris Agreement. Stern suggested that the Green Climate Fund (the global fund intended to support climate action in developing countries) is struggling because of a toxic mix of finance and politics. In addition, he proposed that a more realistic estimate of our financial goals should be in the trillions (rather than billions) of dollars for climate-friendly infrastructure. He emphasized the importance of money going towards sustainable development and suggested that developed countries should provide mechanisms to make it easier for developing countries to draw in private funding. There needs to be capacity-building support for countries that have issues attracting foreign investments, especially considering the particular need in these countries for funds dedicated to adapting to climate change.

Stern’s overall message was that there are policy mechanisms, innovation strategies, and financing options available to address climate change, and the transformation of the global energy system is a key part of these efforts. Without US leadership, we must rely on subnational efforts, including civil society and the business community, to continue to advance while US federal support is lacking. Every action and policy decision taken in the face of climate change should fully account for the true speed and scale with which we need to act.