A Letter from Singapore 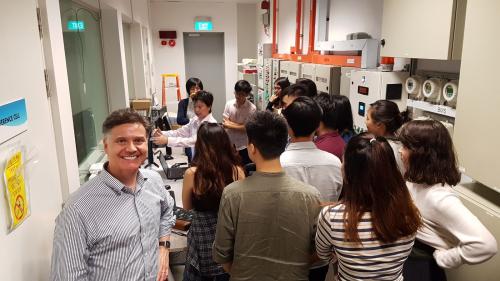 Center Director Professor Dan Esty traveled to Singapore earlier this year to spend several weeks as a visiting lecturer at the Yale-NUS College. Esty spent the first half of the spring 2018 semester teaching, while also engaging with scholars and stakeholders at events across Singapore to explore issues related to international climate change law and policy. 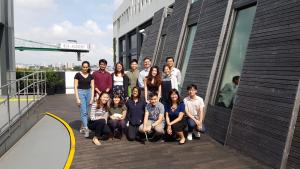 In January, Esty headlined the 7th Annual International Conference on Sustainable Energy and Environmental Sciences (SEES), which served as a forum for policy makers, scholars, professionals, and business leaders to share and discuss innovations in sustainable energy and environmental sciences. Esty delivered the keynote address for the conference entitled, “The Paris 2015 Climate Change Agreement: Breakdown or Breakthrough?” In his remarks, Esty examined the landmark Paris Agreement and explained why it provides the foundation for a ramped–up global push toward a clean energy future. Highlighting how the Paris Agreement represents a breakthrough in global collaboration on climate change, Esty explored the promise of a shift from a top-down approach focused on nation states toward more of a bottom-up strategy that draws cities, states/provinces, and companies into the global effort.

Esty also held a fireside chat with Professor Douglas Kysar of Yale Law School discussing international environmental law. Kysar - an expert on environmental tort law, climate change, products liability, and risk regulation - joined Esty for a discussion focused on questions of liability, enforcement, and justice as they relate to the 2015 Paris Agreement. Kysar and Esty debated the roles of systems of environmental governance, including non-state market-driven governance versus global governance, as well as how international climate change law will have far-reaching effects on Singapore’s pathways to sustainability. 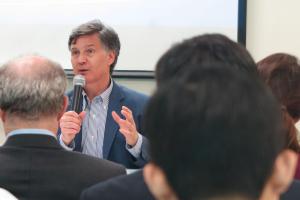 The next week, Esty attended the Singapore Institute of International Affairs (SIIA) dialogue series, where he gave remarks on “Breakthroughs in Sustainable Investing and Finance.” According to SIIA, advancing sustainable development across emerging markets will require substantial capital investment. The UN estimates that up to $7 trillion in annual investment will be needed to reach the Sustainable Development Goals. To generate funding at this scale, private capital is necessary to supplement government resources. At the dialogue, Esty discussed how to develop the most effective policy frameworks that can attract substantial private capital in support of a more sustainable future. These frameworks would enable fully operational green bonds and streamlined standards for environmental/social/governance reporting and benchmarking. Esty also discussed the Center’s Yale Institute on Sustainable Finance (YISF), which brings together market participants, leading scholars, and non-profit organizations to create innovative solutions for sustainable finance.

Later, Esty was joined by Ambassador Kwok Fook Seng, Singapore’s 2015 lead climate change negotiator, for a discussion at Yale-NUS about the status of the global effort to respond to climate change. Esty and the Ambassador discussed how the 2015 Paris Climate Change Agreement represents a breakthrough in the global response to the buildup of greenhouse gases in the atmosphere. According to Esty, the commitment of the developing world to action after years of sitting on the sidelines reflected a new spirit of “common but differentiated responsibility.” Critical to the successful outcome in Paris was the 2014 US agreement with China– ensuring that the two biggest emitters were committed to action. Smaller countries such as Singapore helped to guide this process with their thought leadership. 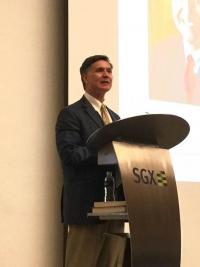 To round out a busy month in Singapore, Esty appeared at the Energy and Environmental Sustainability Solutions for Megacities Program, housed in the NUS Campus for Research Excellence and Technological Enterprise. This program aims to develop a platform to facilitate the understanding, design, and implementation of infrastructure and sustainability solutions for coupled problems in future cities. Esty discussed reasons for optimism in spite of President Trump’s stated intent to withdraw from the Paris Climate Accords, including the supportive forces of the American system of “checks and balances” and the international trading system. Finally, Esty appeared at The Singapore Exchange (SGX), an investment holding company that provides services related to securities and derivatives trading, where he spoke about prospects for connecting investors and companies on sustainability issues, as well as his book Green to Gold.

Esty’s time in Singapore provided opportunities for rich discussion between Yale, NUS, and sustainability experts in the region.