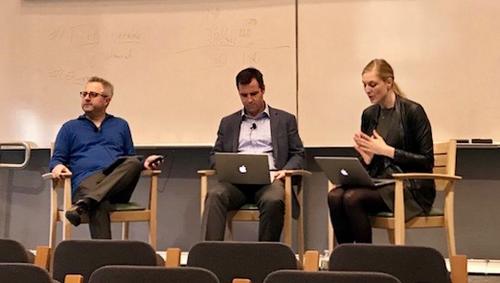 On Monday, October 29th, the Yale School of Forestry and Environmental Studies and the Yale Program on Climate Change Communication hosted the Political Climate podcast. The podcast takes a bipartisan look at climate and clean energy policy and fosters an open dialogue across party lines on politics and the environment. It is hosted by Julia Pyper, a senior editor at Greentech Media; Brandon Hurlbut, a Democrat and former Department of Energy Chief of Staff; and Shane Skelton, a Republican and former Energy Advisor to Paul Ryan. While much of the discussion focused on the politics of the midterm elections, the discussion also highlighted climate and clean energy policies at stake in the November 6 election.

On the ballot in Washington state is an initiative to establish a statewide carbon fee, which would be the first of its kind in the US. The state proposed a similar initiative in 2016, but voters rejected it. The proposal has evolved since then, shifting away from a revenue-neutral approach in 2016 to a system in which revenue from the fee funds statewide programs, including clean air and water programs. This shift, the podcast hosts speculate, might be the change needed for voters to get behind the fee. If it passes, Washington could serve as a model for other states looking to implement their own carbon fee.

Other contested environmental legislation on this year’s ballot include a ballot initiative in Colorado that would curtail fracking activities and an effort in California to repeal the increase in the state’s fuel tax. California’s fuel tax was increased in November 2017 and revenue raised from the tax funds road and infrastructure improvements. Proponents of the proposal want to decrease the state’s cost of living while those opposed cite the positive impacts the tax has had on the environment and the state’s infrastructure.