At COP22, Finding Optimism in the Face of Political Challenges 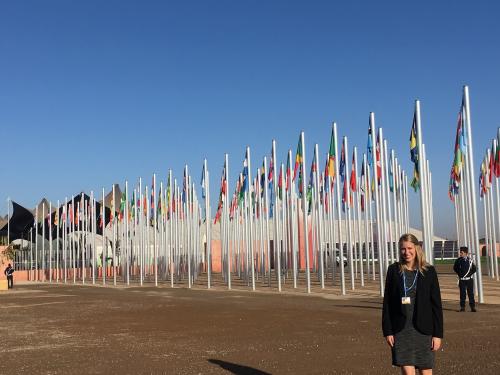 This year, Secretary of State John Kerry visited both of the poles to understand the impacts of climate change on some of our most fragile ecosystems. The impacts that occur in the extreme latitudes are a bellwether for change to come. At the Jakobshavn Glacier in Greenland, he witnessed ice chunks that caved off into the sea. Appalled by what he saw, scientists encouraged him to travel to Antarctica. Just before arriving at November’s United Nations climate conference, COP22, Secretary Kerry visited the West Antarctic Ice Sheet and relayed back to the U.S. delegation at COP22: “the catastrophic period is underway.”

Arctic temperatures have reached record highs throughout 2017, and are currently hovering at least 6oC above normal temperatures. Sea ice is retreating, not accumulating as it should be in the historically colder autumn months. We are on the verge of calamitous “tipping points” that could irreversibly compromise our ability to meet global targets to limit warming. Truly, the catastrophic period is underway.

In Morocco for two weeks this November, delegates from almost 200 nations gathered for the annual international climate conference to hash out plans to address climate change – covering topics from adaptation to finance. At the 2015 conference (COP21), countries submitted their own plans to mitigate climate change and the historic outcome – the Paris Agreement - brought together countries in collective action. At COP22, there were many hopeful signs that international progress on climate change would persist and even thrive in years to come.

One of the biggest challenges was that the U.S. presidential election occurred on the second day of the two-week conference. The outcome shocked the U.S. electorate and the international community. Despite President-elect Trump’s threats to remove the U.S. from the international climate process and the Paris Agreement, country delegates and international partners reaffirmed that the global community will charge forward with climate change work - with or without the U.S. Indeed, the Paris Agreement entered into force sooner than anyone could have imagined, and 113 countries have now ratified the agreement.

No longer will the U.S. be able to reprimand China for dragging its feet in the climate talks. President Xi and the Chinese delegation reiterated that climate change would remain a critical focus for China, “whatever the circumstances.”  The remarks from China, combined with broader international progress, indicate that we are potentially entering a new world order. The U.S. cannot unilaterally dominate international policy, and a focus on global cooperation incorporates all the players on the field. There is also renewed attention to the importance of non-state actors (e.g., local governments, businesses) in addressing climate change.

Climate change is a difficult problem to solve for dynamic and complex reasons. Fossil fuels are cheap and ubiquitous, impacts from emissions today are felt by subsequent generations, and the brunt of those impacts occur to those who have contributed least to the problem. We have the tools to fight climate change, but often lack the political motivation to do so.

But developing countries are blazing a path forward. On the last day of the COP22 conference, the Climate Vulnerable Forum, a group of 48 of the world’s poorest countries, pledged to receive 100 percent of their energy from renewable sources between 2030 and 2050. Costa Rica’s minister for the environment, Edgar Gutierrez, told the BBC, “We don’t know what countries are still waiting for to move towards net carbon neutrality and 100 percent renewable energy.” This is truly international leadership.

Progress Outside of COP

This year saw not just ratification of the Paris Agreement, but also an agreement to reduce emissions from aviation and another that will eliminate hydrofluorocarbons (HFCs), extremely potent greenhouse gases commonly used as refrigerants. If the aviation sector were a country, it would be among the top 20 emitters. By agreeing to cap flight emissions not covered under the Paris Agreement, the aviation industry can become more efficient, use less carbon-intensive fuels, and begin using carbon pricing to drive economic changes. The deal on HFCs reached in Kigali, Rwanda, set an overall cap on HFC emissions and created a plan to phase out their use. Because the agreement will prevent 70 billion tons of carbon dioxide equivalent from entering the atmosphere, future warming will be reduced by 0.5oC. When the goal is to limit global average warming to 1.5oC, every measure counts.

These approaches, both outside the United Nations climate process, feed into the groundswell of action tackling climate change on many levels. Non-state actors like cities and businesses are moving forward with reducing their own emissions, creating internal carbon pricing, and supporting international efforts to build political willpower. Reduced emissions and increased efficiency are the keys to move the needle toward real and meaningful change on the climate.

As we look toward the next four years, big questions remain. We have heard from the Chinese that international progress will happen regardless of U.S. involvement. Developing countries are showing the way forward, with pledges to achieve 100 percent renewable energy. And increases in sectoral-based mitigation, as well as the involvement of non-state actors, will further increase the crescendo of action. It is up to us to make sure that the U.S. does not backslide, and will be poised for international re-engagement in four years.