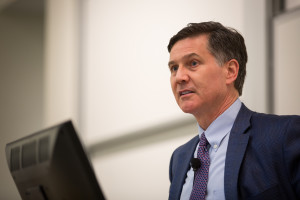 This blog was originally published on RegBlog on November 30, 2015.

As the 2015 international climate summit in Paris gets underway, leaders from President Obama to Pope Francis have renewed their appeals for collective action to address climate change. How to create effective climate policies, however, presents a more complicated inquiry.

Daniel Esty, a professor at Yale Law School, offered a unique perspective during a recent seminar at the University of Pennsylvania. Drawing from his own experience negotiating international climate agreements in the 1990s, Esty argued that the underlying international legal framework for the upcoming negotiations is strategically flawed.

Esty opened the Risk Regulation Seminar, hosted by the Penn Program on Regulation, by reflecting on tactical errors – top-down approaches and a focus on procedure over substance – he perceived in environmental policies developed in the 1990s. Esty then proposed regulations based on results and innovation as the “core elements” of environmental regulation for a sustainable future.

Esty, who also holds appointments at Yale’s School of Forestry and Environmental Studies and School of Management, previously served in senior positions at the U.S. Environmental Protection Agency (EPA). Esty based much of his lecture on his experience working for the EPA and negotiating the first major global climate treaty at the Earth Summit in Rio de Janeiro in 1992. In the decades since, Esty has reconsidered the resulting document, the United Nations Framework Convention on Climate Change, and concluded that it contains several strategic errors. Correcting these policy missteps, he argued, is essential to effectively addressing climate change in the twenty-first century. 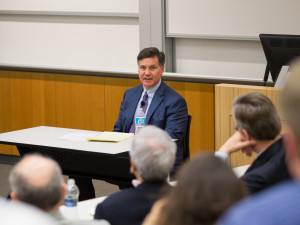 The Framework Convention erroneously employed a top-down approach, according to Esty, placing primary responsibility for reducing greenhouse gas emissions with heads of state. This strategy followed the “command and control” tradition in which federal agencies enforce strict pollution limits at a national level. Many major environmental laws passed in the 1970s, such as the U.S. Clean Air Act used this structure, Esty said. But presidents and prime ministers actually have little control over carbon footprints. Instead, he argued, a new climate strategy must engage with a broader set of leaders, including CEOs, governors, and mayors.

In addition, the Framework Convention mistakenly prioritized procedure – timelines and emissions-reduction targets – over substance – programs actually enabling countries to reduce emissions. An achievable environmental approach, according to Esty, should focus on “implementation” rather than “aspirations.” 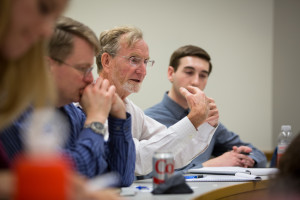 The Framework Convention also assigned emissions cuts to member states based upon each nation’s status as a developing or developed country. The treaty tasked wealthier, industrialized countries with greater responsibility for reducing greenhouse gas outputs. Dividing member states in this manner missed an opportunity to frame climate change as a collective challenge, Esty argued. A communal strategy could shift focus to who pays rather than who emits, meaning firms and governments would pay for pollution costs based on relative emissions output, instead of ascribing emissions ceilings to nations based on development status. Such an approach could motivate more developing countries to proceed directly to clean energy sources instead of developing fossil fuel energy infrastructure.

Esty then shared his vision for a bottom-up, results-oriented, and communal approach to climate change regulation.

To usher countries toward implementing sustainable environmental policies, regulators should devote more attention to paying for regulations. Engaging with the business community is a prerequisite to crafting effective environmental policies, Esty said. Outreach with companies could also help regulators understand the burdens and costs new rules would impose on firms. Companies typically excel at innovation and execution, Esty pointed out, so nations could expand clean energy and achieve emissions reductions by appealing to “businesses as problem-solvers.” 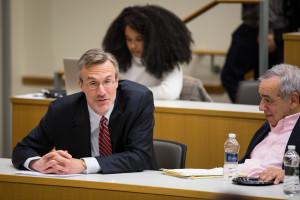 To illustrate, Esty cited an example from his recent experience running Connecticut’s Department of Energy and Environmental Protection. During his tenure, the state launched a Green Bank, which pools public and private funds and encourages businesses and individuals to invest in clean power and energy efficiency measures by offering eligible projects lower cost financing than a typical commercial bank. Instead of Connecticut financing clean energy projects directly, the Green Bank channels state efforts towards reducing  the risks for private businesses investing in sustainable technologies, exemplifying the precise kind of engagement and results-driven strategies Esty recommended during the seminar.

Finally, Esty advocated offering businesses greater choice in how to comply with new environmental regulations. For example, Esty suggested implementing incentive-based programs in which businesses pay different amounts based on the volume of greenhouse gasses they emit. The current U.S. environmental regulatory regime often requires companies to apply for EPA permits, which, if obtained, allow firms to pollute for free. Consider instead, Esty urged, assigning a price to each ton of carbon dioxide emitted. A pay-to-pollute policy could set a starting price of five dollars per ton emitted and escalate that amount each year over the next two decades, resulting in lower emissions in the long-run. This approach empowers firms to calculate tradeoffs themselves, offering more choice and flexibility than a pollution permit structure. 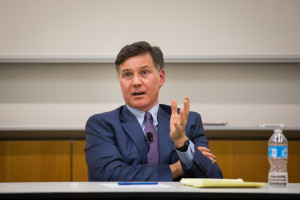 Reflecting on his experience at the Rio Earth Summit two decades ago, Esty recalled a quote from Maurice Strong, the Conference Secretary, who apparently opined that “when so many world leaders are gathered, there are only two possible outcomes: success and real success.” Assessing the tepid progress in climate policy since the Rio Earth Summit, however, Esty said he has come to realize that “failure is also an option.” But he assured the seminar attendees he remains persistently optimistic. If representatives at the Paris Climate Conference adopt an approach similar to Esty’s proposal, focusing on results, engaging with businesses, and offering choices, he thinks real success may be within reach.