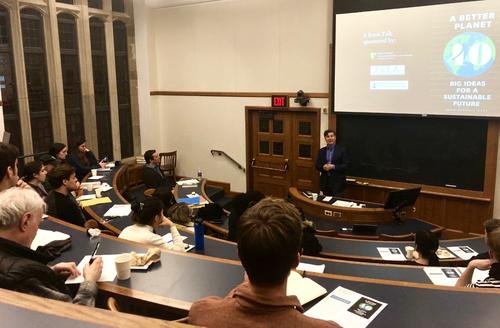 The United States is in the midst of an environmental watershed moment - the U.S. has announced its intent to withdraw from the Paris Climate Accord, and there has been federal deregulation of many environmental laws. At a recent book talk, Center Director Dan Esty, editor of “A Better Planet: Forty Big Ideas for a Sustainable Future,” discussed what is needed for a sustainable future across different issues, sectors, and political views. Douglas Kyser, the Joseph M. Field ‘55 Law Professor at Yale Law School, moderated the conversation. The event was hosted by the Yale School of Forestry & Environmental Studies, the Yale Environmental Law Association, and the Lillian Goldman Law Library.

Through a  series of essays from thought leaders across the environmental field, “A Better Planet” highlights opportunities for different stakeholders to enhance action on sustainability. According to Esty, the book offers a range of ways to think differently about environmental protection. The command and control regulations of the 1970s and 80s, when environmental legislation first began, no longer work for our society.

There is a need for systems thinking to address currently siloed issues like air, water, and waste. Market mechanisms and targeted, interdisciplinary city- and state-level environmental action are part of the path forward and may have the ability to address issues that have been left out in the past, such as environmental justice. In the private sector, the business community has a new role to play, shifting from once being a source of environmental degradation to now taking the initiative to solve environmental problems. The book also addresses the changing role of the individual, from voters and consumers to investors and watch dogs.

Esty noted that it is easy to feel pessimistic because of the current environmental regulation rollback and inaction at the federal level. However, there is also reason for optimism. New technologies and avenues outside of the federal government can make a difference. The path forward does not involve one big answer but many little ones, forty of which are explored in this new book.