Brad Plumer: A Conversation about Climate and Energy Policy in an Era of Rapid Change 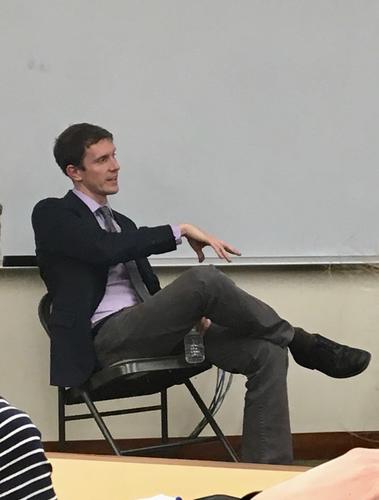 On November 7th, Brad Plumer spoke with Yale students about climate and clean energy policy. Plumer covers climate change, energy policy, and other environmental issues for The New York Times and was previously a senior editor at Vox.com and a reporter at the Washington Post. The event was co-hosted by the Environmental Studies and Energy Studies programs at Yale and sponsored by the Poynter Fellowship in Journalism program. John Wargo, professor of Environmental Health and Political Science at Yale and chair of the Yale College Environment Studies program, moderated.

The event was held the day after the midterm elections and the conversation touched on the election outcomes. While we still can’t expect action at the federal level, Plumer spoke of states leading the charge on climate policies. California is a beacon of hope given its innovative policies that could drive down the cost of clean energy nationally. Yet, while the Washington state carbon fee ballot initiative seemed promising, it did not pass this year. It is unclear why, though the fossil fuel industry funneled a lot of money into fighting it. It will be interesting to see if the state continues its push for a carbon fee in the coming years and what needs to be changed in order for Washington residents to support it.

As a journalist who has been covered the environment for 12 years, Plumer is in the position to see shifts in public perception toward climate change over the last decade. He is concerned about political reactions to destabilizing events due to climate change, particularly refugee migrations. With crop failures, sea level rise, and natural disasters increasing due to a changing climate, we will be seeing more climate refugees and increasing political uncertainty. Political reactions are especially hard to study, Plumer explained, and therefore hard to predict, making reactions to destabilizing events exceptionally threatening.

Plumer also offered unique insight into communicating to the public about science and climate change. He speculated that communicators used to feel the need to convince people of the science behind an issue before addressing action on the issue. But this strategy isn’t necessarily the right way of thinking, and he notices that journalists are starting to recognize this trend. Now, rather than writing articles that attempt to convince people of climate change’s existence, he is interested in the scientific debate and uncertainty over aspects of climate change that are still unknown – for instance, how much sea levels will rise in the coming decades. Covering these topics is critical for getting information to the public about realities of what is to come. In addition, it is important for journalists to cover local impacts and report on concrete actions to take in the face of climate change, which could increase public interest and participation.