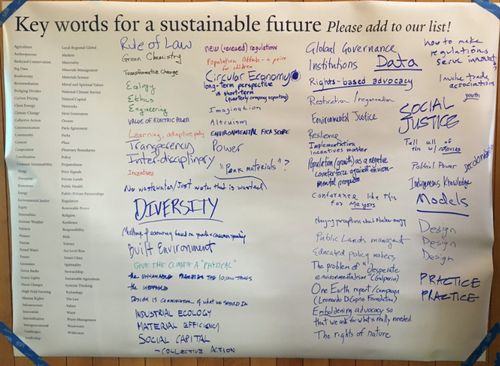 Big ideas for the future of sustainability were the focus of this month’s Yale Environmental Dialogue Symposium. The Symposium convened thought leaders from across sectors to formulate, discuss, and debate new ideas for solutions to today’s major environmental problems. Throughout the Symposium, participants generated ideas around the role of cities, the future of smallholder farms, how law can address the climate crisis, how we can shift our thinking to create equitable and lasting change, and more.

The symposium featured several keynote addresses from environmental leaders. Katie Dykes, Commissioner for the Connecticut Department of Energy and Environmental Protection, spoke about rising to the challenges we face with optimism and innovation. During her talk, she described the unique opportunity that states have to tackle climate change through seemingly mundane decisions about things like state budgets and utility operations. Solutions arise when state and local leaders bring innovation and imagination to everyday institutions. Commissioner Dykes described Connecticut’s myriad challenges and opportunities, such as the potential for innovation in the transportation sector and the need to highlight equity in the energy conversation. She is encouraged by the number of states that are engaging on these issues, and by interstate coalitions, like the Regional Greenhouse Gas Initiative, that are succeeding in reaching across political and state lines to work towards emissions reductions.

William K. Reilly, EPA Administrator from 1989 to 1993, laid out his ideas for the future of American environmental leadership during his address to Symposium participants. In order to solve pressing climate change challenges, especially given the current administration’s views, Mr. Reilly believes that we need an environmental movement greater than the first one he saw in the 1970s. The former administrator focused many of his comments on the federal government, including the need to restore the professionalism of federal environmental appointees, reconstitute the central role that science must play in environmental decision making at EPA, and address the fury felt by some parts of the country toward EPA and “environmentalists” in general. Mr. Reilly went on to describe his belief that climate change must play a central role in the future narrative of the United States, a future that he believes will be marked by American leadership on climate.

James Cameron, Executive Fellow at the Yale School of Forestry and Environmental Studies, Chairman of the Overseas Development Institute, and co-founder of Climate Change Capital, closed out the symposium. He encouraged attendees to continue generating and discussing “big ideas,” and especially to forge connections between generations and across disciplines when thinking about sustainability. How can we, he challenged, change collective consciousness around the environment? Mr. Cameron finished by calling on participants to continue asking big questions, offering big solutions, and shaping the future of sustainability to create a better planet for all.